skip to main | skip to sidebar

Very proud to see Google created a special logo showing several art pieces of Constantin Brancusi to mark the moment of the 135th birth anniversary. He was a great Romanian artist born in a village just few kilometers away from Tirgu Jiu city. I am so proud, as this is the city where I also come from and spent my lovely childhood. It is a small city, but still nice, and it worths paying a visit there as you will find several art pieces signed by Constantin Brancusi:
The Endless Column
The Kiss Gate
The Table of Silence
On Wikipedia there are few more details on city of Tirgu Jiu.


The work of Constantin Brancusi was not appreciated by Romania while alive. He moved later and created most of his master pieces in Paris. In his testament he donated many pieces to his country, but the government at that time refused the donation not understanding the real value of his work, while France made him member of French Academy.
Posted by Elena-Ramona Modroiu at 12:44 No comments:

Almost two weeks ago, Siremis v2.0 was released - this release brings a new look, a major-refactoring of the web interface for easy administration of your Kamailio SIP server v3.1.

Siremis is used also during Kamailio Advanced Training classes for management of the SIP server, a good opportunity to learn about Siremis itself.

Details can be found here. Testing and feedback is much appreciated!
Posted by Elena-Ramona Modroiu at 11:58 No comments:

Before leaving for summer vacations, we had a serie of Kamailio SIP Router Events. If you missed the chance to be present, you can find few insights by browsing the project web page.

The annual devel meeting took place on June 8, 2010 - this time hosted by Fokus Fraunhofer Research Institute in Berlin, Germany - was a good opportunity for users and new developers to join the core developers and get into open debates. Click for detailed meeting minutes

Just after Devel Meeting, Kamailio had a presentation booth at Linux Tag 2010. Four days in a row open source community fans were able to meet and discuss with many of the project core developers about the current and future status of the project. Many visitors were surprised to find out that Kamailio is the SIP server enabling their every day calls, as clients of 1&1. 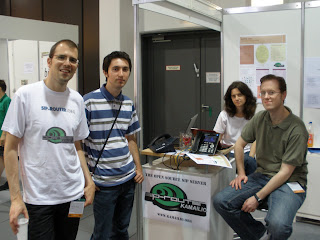 The event was powered by Kamailio Project, 1&1 and ASIPTO.
Posted by Elena-Ramona Modroiu at 03:44 No comments:

This week was the "London" week!

It started with Present and Future of SIP Routing hosted by Kamailio Project at SUN Microsystems premises in London.

SIP Router project is the common framework for development of SER and Kamailio (former OpenSER), hosting the unique source code. With lots of enhancements, some of those inherited through the two projects integration and other enhancements developed during the last year, Kamailio 3.0 - released January 2010 - pleasantly surprised many members from the users community by the great outcome of the unforking process.

A strong development team couldn't lead to anything else than to an outstanding unforked release of the best SIP server since 2001.

Kamailio 3.o brings a boost in features, a listing of them can be found at:
http://www.kamailio.org/w/kamailio-openser-v3.0.0-release-notes/

UC Expo 2010, March 10-11 at Olympia in London, proved to be a good meeting point for UK companies around VoIP, telecommunications and not only. UK is known as one of the leading markets for innovations in communications, VoIP and gadgets.
Posted by Elena-Ramona Modroiu at 06:21 No comments:

A new major release of Siremis is available as v1.0.0. And of course it is ready to work with latest Kamailio(former OpenSER) 3.0 and SIP-Router.org.

This is what you will find new:
Link to release announcement
Posted by Elena-Ramona Modroiu at 13:36 No comments:

It is officially: InfoWorlds'2009 Bossies has awarded Kamailio project within The Best of Open Source Networking Software 2009.

It is an honor for the project, its developers and its user community. A great team work!

Time to look a bit at the past. My first contribution started with xlog module back in 2003 when everyone was working for SIP Express Router (SER). In 2005 I co-founded OpenSER (renamed July 2008 to Kamailio). Today, the development of Kamailio is tied with SIP Router project, continuing the goals of delivering rock solid, performant and flexible SIP server.
Posted by Elena-Ramona Modroiu at 00:32 No comments:

A new release of SIREMIS - the web management interface for Kamailio (OpenSER) and SIP-Router.org - is available for download today.

What brings new this release? Just the mainlines here:

Elena-Ramona Modroiu
Currently COO of ASIPTO, involved tightly in the VoIP area since 2003 when I joined SIP Express Router (SER) working group at Fokus Fraunhofer Institute, Berlin, Germany, for research work and diploma thesis defending. In 2005 I co-founded the open source project Kamailio (aka OpenSER), now used in many VoIP platforms around the world. Starting with 2008, SER and Kamailio (aka OpenSER) projects got reunited under the roof of the SIP Router framework. Both SER and OpenSER users can easily upgrade to newer versions coming from SIP Router framework, backward compatibility being kept for both user communities.